Lucara Recovers 1,758-Carat Diamond at Karowe Mine; It’s the Second-Largest Ever

Lucara Diamond Corp. has unearthed a tennis-ball-size 1,758-carat diamond at its famous Karowe Mine in Botswana. The diamond rates as the second-largest ever found, easily overtaking the 1,109-carat Lesedi La Rona, which was also recovered at Karowe. 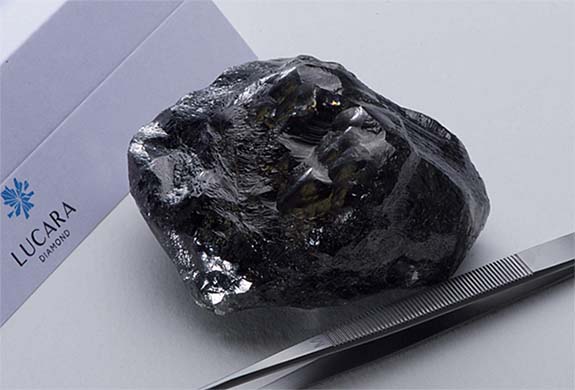 But, unlike the gem-quality Lesedi La Rona, which was purchased by diamantaire Laurence Graff for $53 million and recently cut into 67 high-quality diamonds, Lucara’s newest find is being characterized as “near” gem quality with “domains of high-quality white gem.”

Looking closely at the photo, above, one can see a sharp transition from grey-black to silver-white in the lower left portion of the rough diamond. Lucara reported that further detailed analysis is ongoing. 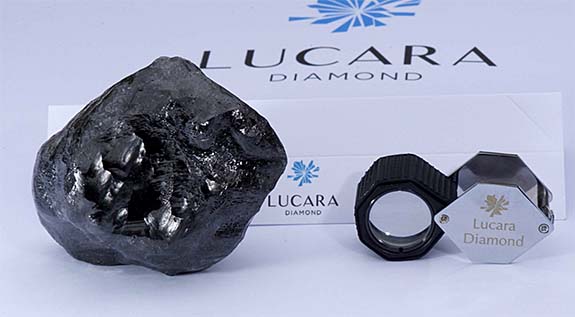 Weighing more than three-quarters of a pound, the recently recovered stone measures 83mm x 62mm x 46mm and managed to get through Lucara’s diamond sorting process without breaking. 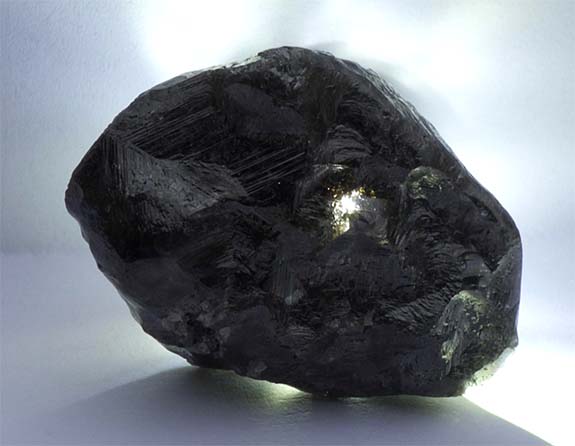 Lucara CEO Eira Thomas said the diamond remained unscathed during the recovery thanks to the company’s state-of-the-art XRT circuit, which was commissioned in 2015.

Throughout history, diamond-bearing rock was typically drilled, blasted, hauled and put through crushing machines to get to the gems that may be hiding within. During that process, extremely large diamonds, some weighing hundreds of carats or more, were often damaged or even pulverized.

With the advent of XRT scanners, the mining process is becoming kinder and gentler. As the rocky material comes down a conveyor belt, the scanners can pick out the diamonds based on their chemical composition. Older scanners used to depend strictly on the stone’s ability to reflect light.

The diamond-rich material is then separated from the rubble and moved to a secure area for processing.

Since going online with the XRT circuit in 2015, a total of 12 diamonds larger than 300 carats have been recovered at Karowe, including two greater than 1,000 carats, from a total production of approximately 1.4 million carats. Of the 300-plus-carat diamonds recovered, 50% were categorized as gem quality with 11 sold to date generating more than $158 million.

Thomas is confident that more large, high-quality diamonds will be discovered as the company mines deeper in the orebody and gains access to geologically favorable material.

The largest diamond ever recovered is the 3,106-carat Cullinan, which was found at South Africa’s Premier Mine 2 in 1905. The high-quality rough stone was cut by the Asscher Company into nine principal diamonds and 96 smaller diamonds. The Cullinan I and II – known as the Great Star of Africa and the Lesser Star of Africa — are set in the Crown Jewels of Britain. They weigh 530 carats and 317 carats, respectively. The remaining seven principal diamonds — ranging in size from 94 carats to 4.39 carats — are in the collection of Queen Elizabeth II.