Today’s virtual tour of the Smithsonian’s National Gem Collection delivers an up-close-and-personal look at the incomparable “Carmen Lúcia Ruby.” The 23.10-carat specimen has the distinction of being the largest faceted ruby in the collection and one of the finest Burmese rubies ever known. 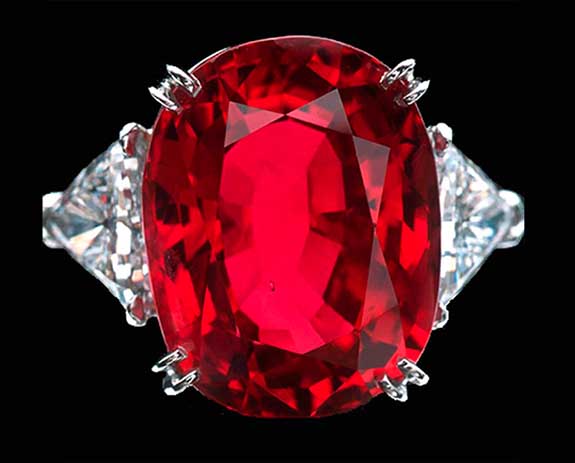 Exhibiting a richly saturated red color known as “pigeon’s blood,” the Carmen Lúcia Ruby generated a wave of excitement when it arrived at the Janet Annenberg Hooker Hall of Geology, Gems, and Minerals back in 2004. At the time, curator Jeffrey Post called the gem “the most important addition to the collection in the 20 years that I’ve been here.”

Until this past spring, it would have been easy for visitors to see the Carmen Lúcia Ruby. But with all the Smithsonian museums in Washington, DC, remaining temporarily closed to support the effort to contain the spread of COVID-19, we’ve been presenting these virtual tours.

Previous stops on the tour have included the “Chalk Emerald,“ “Gifts from Napoleon,“ “Stars and Cat’s Eyes,“ the “Logan Sapphire,“ the “Dom Pedro“ aquamarine, the “Steamboat“ tourmaline and a collection of enormous topaz. 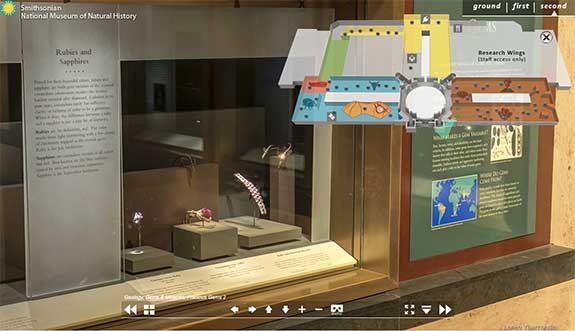 Here’s how to navigate to the exhibit called “Rubies and Sapphire.” The first item in the ruby case is the Carmen Lúcia.

— First, click on this link… The resulting page will be a gallery called “Geology, Gems & Minerals: Precious Gems 1.”

— Next, click the double-right-arrow once to navigate to the gallery called “Geology, Gems & Minerals: Precious Gems 2.”

When you arrive, the center-left of the screen will be filled with a topaz exhibit.

– Click and drag the screen 90 degrees so you can view the wall of cases to the right.

– Touch the Plus Sign to zoom into the exhibit titled “Rubies and Sapphires.”

(You may touch the “X” to remove the map. This will give you a better view of the jewelry. You may restore the map by clicking the “Second” floor navigation on the top-right of the screen.)

The panel between the ruby and sapphire cases explains that they are both gem varieties of the mineral corundum.

“Colorless in its pure state, corundum rarely has sufficient clarity or richness of color to be a gemstone,” the display states. “When it does, the difference between a ruby and a sapphire is just a tiny bit of impurity. Rubies are, by definition, red. The color results from light interacting with a few atoms of chromium trapped as the crystals grew. Ruby is the July birthstone. Sapphires are corundum crystals in all colors but red. Best known are the blue varieties, tinted by iron and titanium impurities. Sapphire is the September birthstone.”

The Carmen Lúcia Ruby is named for Carmen Lúcia Buck, the beloved wife of Dr. Peter Buck, who donated the ring to the Smithsonian after her passing in 2003. Carmen had been undergoing cancer treatments in 2002 and had heard rumors that the magnificent ruby might be coming on the market after being in private hands for decades. Carmen had hoped to purchase the ring to celebrate her recovery. Sadly, she would never wear it.

Knowing how much she admired the ring, Peter Buck, decided to provide the Smithsonian with the funds to purchase it and put it permanently on display. The Carmen Lúcia Ruby would be a gift to the American people and a testament to his everlasting love.

“So it seemed like a really appropriate thing to do, to give it to the nation so people could come and see it,” he told The New York Times in 2004. “She would have really liked that people could see it and know it was the Carmen Lúcia Ruby, and that it wasn’t locked away in a vault somewhere.”

The oval stone was sourced in the fabled Mogok region of Burma in the 1930s. While sapphire, emerald and diamond gems weighing hundreds of carats exist, high-quality Burmese rubies larger than 20 carats are extraordinarily rare.

A nuclear physicist by trade, Peter Buck is famous for making one of the most brilliant investments in U.S. history. In 1965, at the age of 35, Buck loaned $1,000 to his family friend, Fred DeLuca, so he could open a sandwich shop. That shop was intended to help the 18-year-old DeLuca pay for college at the University of Bridgeport in Connecticut. DeLuca honored his benefactor by naming the shop “Pete’s Super Submarines.” That single store has since grown into the Subway sandwich chain, with 44,758 restaurants in more than 100 countries.